San Diego Harbor Police have five MetalCraft Marine FireStorm 36 fire and rescue vessels, some of which can be seen in action here.

A yacht is destroyed after bursting into flames Monday afternoon on Harbor Island. It is expected to be towed to South Bay Marine Group on Monday night.

Fire engulfed the Sea Siesta, a 57-foot Chris Craft Constellation that was docked alongside other boats at the Sunroad Resort Marina.

used water cannons and foam to extinguish the fire around 12:30 p.m. Monday. On behalf of MetalCraft Marine we would like to congratulate Alexandria Fire Department on the delivery of their new FireStorm 50 high speed fireboat.

Georgetown is a 1hr 45 minute boat ride from North Charleston. They were called-in for mutual aid.

The boat ran up, and pumped water for 3 hours straight - no issues.

And here's a news report from Fox Carolina ST. LOUIS (KMOX) - There?s a new riverboat headed down the Mississippi toward St. Louis, and this one will carry the name of Cardinals baseball legend Stan Musial.

It's a 44-foot fireboat commissioned by the St. Louis Fire Department and is capable of speeds up to 38 knots.

It can pump up to 7,000 gallons of water or fire-suppressing foam per minute and can fight fires even while it?s moving.

The new Fireboat Number Six, aka ?The Stan Musial?, was built by MetalCraft Marine. The company has shipyards in Clayton, New York and Kingston, Ontario. The article is about the effectiveness, and the foreseeable future, of port security federal funding programs.

Check out some of these amazing photos

from a joint training exercise involving Wilmington Delaware's new FireStorm 70 Fire and Rescue boat and a bunch of helicopters.

Thanks to Carl Zipfel, Battalion Chief, Wilmington Fire Department for the photos On behalf of MetalCraft Marine we would like to congratulate Stamford Fire Department on the delivery of their new FireStorm 32 high speed fireboat.

Congratulations to PanOcean Oil, Nigeria on the delivery of their new Patrol boat On behalf of MetalCraft Marine we would like to congratulate PanOcean Oil, Nigeria on the delivery of their new Patrol boat!

Check out our latest video, our new Sentry 44 Patrol Boat MetalCraft Marine's FireStorm 70 is mentioned in a very complimentary article in Port of Houston magazine.

"As the nation's busiest port in terms of foreign tonnage and home to one of the world's largest petrochemical complexes, our firefighting team is second to none in protecting this national asset and the many who work here," said Port Authority Executive Director Len Waterworth. "These new vessels will strengthen these firefighters' ability to save lives and property along the 25-mile long Port of Houston." Read the story at CBC News

that features a photo of a MetalCraft Marine Long Range Interceptor Patrol Boat. The MetalCraft Marine FireStorm 32 was commissioned in an impressive ceremony on Friday, June 21st.

along with some great photos from hamptonroads.com. Authorities responded to the downtown Pensacola marina after a man jumped over a guardrail into the water at about 7:07 p.m., according to a news release from Pensacola Fire Marshal David Allen. The man was unable to swim.

Pensacola police threw the man a line to hold on to and an officer jumped into the water to help the man until Fire Boat One arrived. Fire crews then pulled the man from the water with the officer?s help.

This past Wednesday morning the first of three FireStorm 70 fireboats for the Port of Houston Authority began its 12 day journey to home port.

provided by the Port of Houston Authority.

with some of the members of the delivery crew. Osage Beach Fire Department personnel and firemen from other lake-area district, battled a fire Saturday evening that damaged much of one building at Lakewood Resort near the Grand Glaize Bridge.

The photo clearly deomonstrates how a fireboat is vital.

Shown is the The FireStorm 30 we built for Osage Beach Fire Protection District, MO. We have lots of news from Pensacola and their proud new FireStorm 32 fireboat. Check out this news story

from Newport News VA about a truck that crashed precariously over the edge of the 4-lane, 4.6 mile-long Monitor-Merrimac Memorial Bridge-Tunnel

"This incident highlights the excellent and immediate response by multiple agencies," said Capt. John Little, the commander of Sector Hampton Roads. "It is the result of partnerships and joint training conducted within the Hampton Roads emergency response community."

Congratulations to New Haven Fire/Police, CT on their new FireStorm 36 on the delivery of their new FireStorm 36 The San Diego Harbor Police Department has a distinction that most law enforcement agencies don't have: marine firefighters. All of their officers are cross-trained to meet firefighter standards and assist with rescue incidents.

Here's a good article from firehouse.com

The department?s fleet includes five MetalCraft Marine FireStorm 36 Emergency Response Vessels. Each of these vessels contains a Darley fire pump, or pumps depending on the configuration, which supplies two monitors. One is a roof-mounted, 2,000 gpm remote control unit; two discharges and a five-inch Storz connection for supplying land-based units. They also have a built-in foam distribution system.

EMS care can be provided on the large open deck space or inside one of the heated interior berths of the vessel.

Congratulations to the City of Pensacola, FL Fire Department On behalf of MetalCraft Marine we would like to congratulate York County, VA Fire Department Pnj.com has this story and video

about the vessel's arrival at Bahia Mar Marina in Pensacola.

The 32-foot fire boat will be used as needed within the Pensacola area, according to the Fire Marshal. The Fire Marshal said the fire department will continue to work closely with the U.S. Coast Guard and Florida Fish and Wildlife to enhance the level of safety on and near the water.

of the boat being prepared for launch.

on Camden NJ's FireStorm 50 responding to a fire at the base of Tacony-Palmyra Bridge.

Turns out it was an electrical problem with a channel light attached to the bridge.

Check out this report

From Ponce de Leon Inlet, Florida. It's a rescue involving one of the new MetalCraft Marine Long Range Interceptor 35 vessels while it was out on sea-trials. 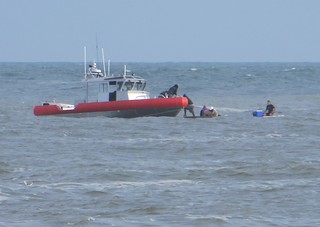 Rescuers pull up to three men whose boat flipped in the middle of Ponce de Leon Inlet on Sunday.

"About 3:30 p.m. (Sunday) a 10-foot-long boat with three persons aboard capsized," Petty Officer Jessica Potter said Monday morning. "The boat was too small for sea and wind conditions."

She said a Good Samaritan spotted the overturned boat and plucked its unidentified occupants out of the water before a crew from U.S. Coast Guard Station Ponce de Leon Inlet arrived on scene.

Port Orange real estate agent Phil Hanner said he was walking with his daughter along the North Jetty of the inlet when he saw what looked like men standing upon the water.

"They were waving their arms trying to get someone's attention," Hanner said. "It was super rough out there."

A stand-up paddleboarder went to the men's aid, he said.

Hanner said a crew from Towboat US hooked a line to the capsized craft and towed it to shore.

Neither Potter nor Hanner could say whether the boat's occupants were wearing lifejackets at the time of the mishap.

Charleston, S.C. Firefighters rescue man and a woman in Charleston Harbor at night

Check out this story Charleston Fire Department officials say they got a 911 call near South Battery and Limehouse streets about a male and female yelling for help from the harbor.

Responders could not see the victims because of the dense fog, but made contact with them over a PA system.

Responders aboard the new Charleston Fire boat rescued the 22 and 23-year-olds who were on top of a small overturned boat.

According to the CFD, the victims were in the water for over an hour before the rescue

The CFD boat used in the rescue was acquired by the department in late November 2012.