Fire engulfs 80-foot yacht off the coast of Miami beach

Check out the photos of this spectacular fire off Miami Beach this week.

Evidently it broke out just as officers were about to board for an inspection. "This is the sixth year Ontario has partnered with the Chamber to present the Ontario Global Traders Awards,? said Minister of Economic Development and Innovation Brad Duguid. ?We are proud to recognize and celebrate outstanding companies that are creating jobs, exploring new markets and driving Ontario?s economic future."

The Ontario Chamber of Commerce is proud to honour companies like Rapp Optical, MIS Electronics and MetalCraft Marine, who are helping Ontario emerge stronger. To learn more about the event, visit obaa.ca

has posted this excellent video

about their dual Law Enforcement and Marine Firefighter duties in their fleet of FireStorm 36 high speed aluminum fireboats. Here are some great photos of one of San Diego Harbor Police's FireStorm 36 fireboats responding to a boat fire at a marina on September 26 2012.

Congratulations to Mystic, CT Fire Department on their new FireStorm 32 Update: Here's an article From the Mystic River Press about the cristening of the boat Joseph B. Herman II.

Congratulations to Bomberos De Costa Rica on their new FireBrand 28 on the delivery of their new FireBrand 28.

Congratulations to Bomberos De Panama on their new FireBrand 28 On behalf of MetalCraft Marine we would like to congratulate Bomberos De Panama on the delivery of their new FireBrand 28.

Congratulations to the St. John's Fire Department on their new FireBrand 28 On behalf of MetalCraft Marine we would like to congratulate St. John's SC Fire Department

and Chief Karl E'Ristow, Captain Russ White and Captain Gavin Gilcrease on the delivery of their new FireBrand 28. In May of 2011, The City of Wilmington contracted with MetalCraft Marine of Cape Vincent, New York, to build a new multi-mission fireboat.

The Boat was constructed in Kingston Ontario and was completed on June 29, 2012. The boat departed from Lake Ontario on July 9 with three members of the Wilmington Fire Department aboard.

The boat entered the Delaware Bay on July 13 and traveled up the Christiana River to Marine Station 7 where it will be permanently berthed.

Some of the features of the new boat are:

The new Fireboat cost 3.5 million dollars and was funded primarily by a Federal Emergency Management Administration (FEMA) Port Security Grant that the Wilmington Fire Department was awarded. Additional funding was provided by Public Service Electric and Gas Company (PSE&G), Midstream Magellan Partners, located in the Port of Wilmington, and the City of Wilmington.

The fire department will spend the next few weeks outfitting the boat with equipment and training before placing the boat in service. The Department will announce an official christening sometime in the near future.

Congratulations to the Wilmington Fire Department on their new FireStorm 70

Update: Here's a nice account of the Christening of Firefighter At 7:44 a.m. firefighters responded to a report that a boat had sunk and was leaking fluids.

Crews arrived to find an approximately 32' boat listing while tied up at its slip. Operationally, crews stabilized the boat, deployed absorbent pads to contain leaking fluids, and set up a ?fog? nozzle to suppress any potentially dangerous fumes. The Incident Commander coordinated the environmental response with the US Coast Guard, Department of Ecology

This is the second sinking incident in the past two months and illustrates the value of preventative maintenance on watercraft.

According to the Boat U.S. Foundation

, the most common reasons boats sink at the dock are:

The fireboat, model FireStorm 32, was built by MetalCraft Marine in Kingston, Ontario. It is powered by dual Cummins diesel engines, each rated at 480 horsepower, which were manufactured at the Cummins Turbo Technologies facility on Leeds Avenue in North Charleston, SC. Its top speed is 43 knots or nearly 50 MPH and can pump more than 2,000 gallons of water per minute through 4 water monitors mounted on the roof, bow and two on the aft deck.

The fireboat can traverse and operate in very shallow water due to its shallow draft and jet drive configuration. The aft deck provides an oversized dive platform/recovery deck, which provides water level working space for deployment and recovery. The cabin is equipped with VHF, radar integrated with GPS, infrared capabilities and high output scene and spot lights for night operations. 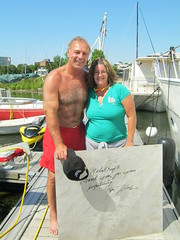 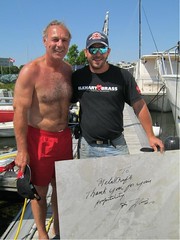 stayed with us at Kingston Marina 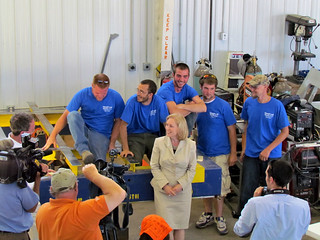 Here are photos from the recent visit by Senator Kirsten Gillibrand

to our facility in Cape Vincent, NY.

Here are video and audio news reports from the Senator's visit. Tom is one of two inductees in the visionary category this year. MetalCraft Marine US Inc and partner Brunswick Government and Commercial Products (Boston Whaler) have been awarded the contract for the design/production of the new generation Long Range Interceptor II for the US Coast Guard. The boats will be an integral part of the National Security Cutter's Over the Horizon Program. The design is based on the MCM/Brunswick Sentry Line of Patrol Boats. The five year contract is valued at $10, 189,166.00.

The LRI II is powered by twin Cummins Tier III 6.7L diesels and Ultra 305 waterjets with electronic joystick controls and can reach 42 knots. The engines are JP-5 or alternative Bio-Fuel optional and have a 5 minute run dry feature. All systems are designed for equatorial and arctic conditions and has a fully integrated standard Coast Guard Furuno electronics package.

The high speed LRI II patrol boat has a range of 236 nautical miles on plane and can operate up to Sea State 5. It can carry 15 crew/boarding party or passengers in ergonomic suspension seating by Shoxs and Bostrom. The cabin can be partially or fully enclosed and has remarkable 360 degree visibility as well as overhead for navigation and shipboard recovery and launching maneuvers. Hull structure is designed to ABS HSNC and systems design to ABYC and CFR 46 standards.

MetalCraft Design has incorporated a heavy duty Gilman Corp closed cell foam fendering system that can withstand 9 knots of impact. There is a quick change out proprietary clamping system that permits individual 6' sections of the collar to be replaced independently. Gilman has supplied the fendering system for the CG 47' MLB and 46' RBM programs.

The first boat will be delivered in 2012 and go through extensive testing to ensure all failsafe systems are in check. Follow on deliveries will commence through 2013.

MetalCraft Marine of Cape Vincent NY is a designer builder of high speed aluminum patrol, fire & rescue boats and is designer of the Brunswick Line of Sentry Patrol Boats. The company is celebrating its 25th anniversary in 2012 and is pleased to be working with the USCG small boat group.

provided to Quinte Search and Rescue

thanks to Veridian Connections

The vessel in the video is a MetalCraft Marine Kingfisher 28 that was dedicated last August. 3-day Pump Course for the Lads The lads look pretty good in battle gear, don't they? Click for a larger version.